In the past weeks I’ve been doing a lot of new work. Sometimes I would inadvertently show cool stuff under a gif format or just a screenshot, and people would be like “wait how did you do that?“.

It’s not the product so much as the freakin’ half-second it took me to do it.

I’ve decided to share the tools I use because not enough people know them, because they’re fast, and because the amount of time it saves you at the end of the day is tremendous.

I will update this post if new tools are tested and approved, so stay tuned.

The white text over the barrels are the fuel.

The green to cyan to red to green is the temperature. Currently, the threshold for the barrels is set to 1500 fake degrees, so once it reaches 1500, it starts burning. When a barrel’s temperature is close to the threshold (about 75%), it starts radiating its heat to the nearby barrels, thus starting the chain reaction.

As you may know, I wanted to create an eBook to teach entity component systems.
Well, it won’t happen.

The project is cancelled, the eBook won’t see the light of day. I am not closing down the blog, I’m just stopping this project.

If you’re still interested in ECS, here’s the cool news: I’ve found something called PlayCanvas, which is essentially Unity 3D in JavaScript. It’s got the entity/component built right-in. It’s pretty fun! I had a blast playing with this, and it shows promise. Take a look, dig in, follow the tutorials, fork the sample projects, and just dive in the fun.

So you’re writing the most interesting piece of JavaScript of all time, or you’re preparing for a job interview, or you want to impress your significant other, or something, whatever.

You realize that you’re not even sure you can explain what a JavaScript closure is. I’m sure of this because for about 10 years I’ve seen scattered information about JavaScript closures all over the place. This wouldn’t happen if people grasped it easily.

Well, hang on to your brain, here’s a huge list of resources about closures:

Now bookmark that stuff, read one article per day and finally you’ll be able to impress your significant other. 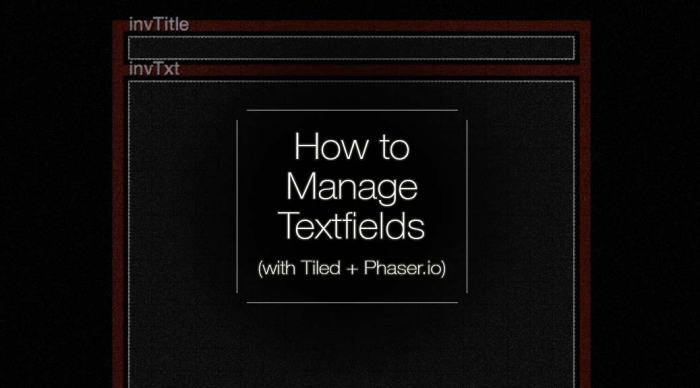 In my last post, I hinted at a way to manage textfields with Tiled. I also said to prepare yourself, because your pants would get blown away.

Well, did you remove them? ‘Cause they’re about to explode.

END_OF_DOCUMENT_TOKEN_TO_BE_REPLACED

This is one of those innocent looking webapps that blow my mind by their usefulness and ease of use (ease of usefulness?)

It all started when I needed a better font than Arial for my retro/pixel/end-of-80’s Roguelike game. At first I thought there would be a way to package the font with the game, CSS @font-face style, and be done with it, but this is different, since I’m using Phaser and displaying bitmap fonts.

It seems like the most popular option is to use webfonts in Phaser, but I really wanted to package the fonts and make the game playable offline.

I finally stumbled upon Littera, and my quality of life significantly increased. END_OF_DOCUMENT_TOKEN_TO_BE_REPLACED

You’ve read it, heard it, and seen it a hundred times before, but I’ll say it again:

Tools are great. – by anonymous

… or something like that. This leads me to the next point:

IDEs are tools. – by common logic

And good tools, well used, make for good results. I also have another saying:

Cut the crap. – I’m not good with famous quotes

So here’s the list of my favorite Sublime Text plugins.

In the “Can’t Live Without” category:

In the “Organisation” category:

In the “Documentation” category: 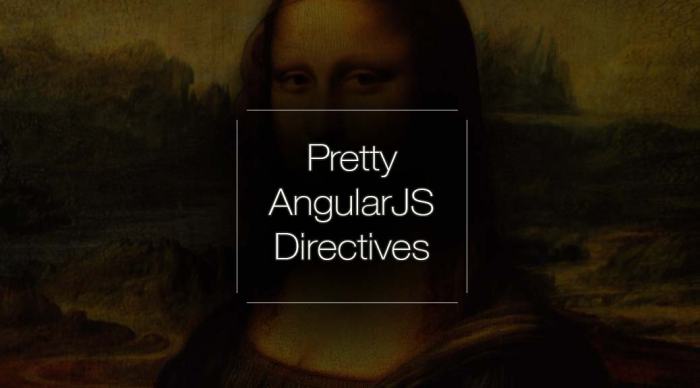 The first thing I thought when I saw AngularJS directives was “holy HOLY!”, then I promptly screamed in agony. Nothing too dramatic, you know.

I can’t help but see how useful and unfriendly this is. This is practically shouting “Beginners! Flee now, or face several hours of therapy where you’ll revisit all your inadequacies!“. Seriously, just look at this.

END_OF_DOCUMENT_TOKEN_TO_BE_REPLACED 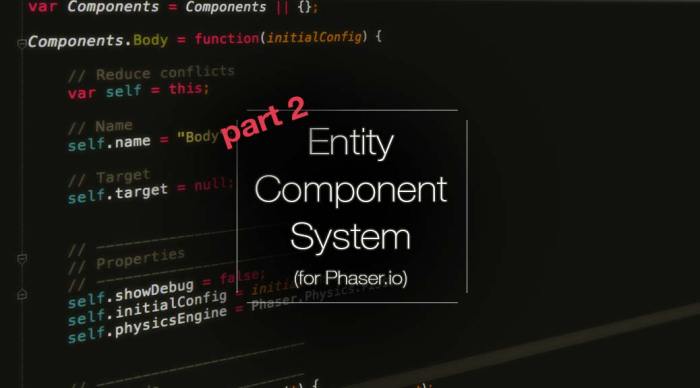 The Magical World of Entities and Components

Hello and welcome back for the next iteration in this ECS adventure. You’ll learn about how I chose to make components, tied to the same entity, talk together. I believe this is the coolest part.

And now, let’s dive into a…

Let’s imagine we have a game where there are WOODEN CRATES, and WOODEN DOORS. That means we have two entities, the Crate entity, and the Door entity. Also, wood can break, and wood can burn. These are two components.

It lends itself pretty well to our system. Let’s see what are our components’ outstanding traits:

This is totally BAREBONES, we could add a lot more properties and methods for the sake of making this even more interesting, but this is a bit out of the scope of this tutorial, and in time you’ll be able to do it yourself.

ALRIGHT! Remember our part 1 on Entity Component System? We’ll continue with what we learned on that tutorial. Let’s take a look at what our components look like in a file.

So do you see how the only thing in these components is just handling something VERY specific? They are ZERO aware of the door, and of any other components. They are blind.

– you say, clearly flustered, your fists ready to fight –

“If the components are not aware of each other, how can the flames break the entity?”

Excellent question! The glue resides on the entity. BEHOLD!

So as you can see, communication between components is as easy as
masterComponent.signal.add ( slaveComponent.method, this );

Now that we have our glue, our components and our entities, it’s easy to tie them all together. Here’s the complete file for a simple Door.

Now, your Door only needs to catch fire to start its terrible non-zen journey into destruction.

And voilà! FIRE! DESTRUCTION! PAIN! TERRIBLE THINGS!
All of this with components 😀

So the other day I saw on invrse.co that there was interest in having an entity component system for JavaScript games, to which I self-fived myself and promptly tweeted how cool it was.

A couple of days earlier I had started looking into ECS, for a Phaser game I’m currently working on. I strongly suggest that you read invrse’s post up there, it’s super interesting and well written, and if you’re unfamiliar with ECS, I urge you to read it!

So hey, one little disclaimer before we move on: I am totally half-assing this. I’m pretty sure I’m miles away from the real way an ECS should be done, but bear with me, what’s coming is pretty cool!

Half-assing in all its glory

ALRIGHTY-O, let’s get started with a quick (half-assed) recap.

We’re just adding behaviors and properties to an object.

With this information, let’s take a look at how components should behave:

Ok, ok, that’s cool. Let’s take a look at a basic component without any behavior at all. Like I said before, some kind of physics component is usually used during game development, so we’ll create the Body component.

Now, the next step is to add the target, or simply put, the entity to which we are referring to, and the subject of the components behaviors.

Awesome. This is pretty much the basis for all our next components. You can copy paste and rename them to your liking. Personally, I like to give them adjectivized names, to quickly understand that they’re components, and what they do, for example Flammable, Droppable, Throwable, you get the idea…

Now here comes the meat for our Body component.

So we’ve set some default properties (self.physicsEngine), and we’re enabling the object in the physics world of your game.

Ladies and gentlemen, we’ve just created our first component, and it is absolutely simple. Don’t be fooled by the apparent number of lines, there are many lines of comments and whitespace.

So we’ve created our first component. Now, how do we use it? Let’s imagine we have a Player class.

You need a this.components array. Storing the components you add to an entity makes them accessible, and you can then call the update method of ALL your components in easily:

Well, this wraps up the first Entity Component System post. I hope it made sense to you, and don’t hesitate to comment!

Number of people disappointed by my blog posts: